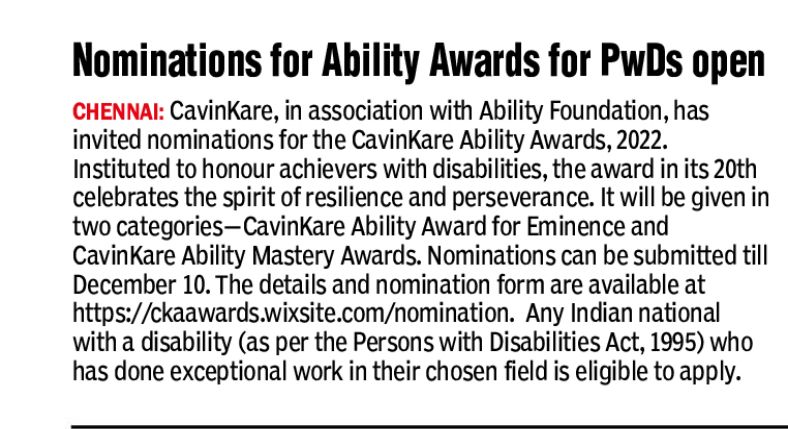 ~ Celebrating the achievements of persons with disabilities for 19 consecutive years, this year’s edition continues to honour resilience and perseverance ~

National, 25th November 2021: FMCG major CavinKare in association with Ability Foundation jointly invite nominations for The CavinKare Ability Awards 2022. Instituted to honour exemplary achievers with disabilities, the award in its 20th edition this year, celebrates the spirit of resilience and perseverance. Given in two key categories – CavinKare Ability Award for Eminence, and CavinKare Ability Mastery Awards, nominations are now being invited from across the country till 10 December 2021. The details and nomination form are available at https://ckaawards.wixsite.com/nomination.

The CavinKare Ability Awards recognize astounding achievements of individuals who have dared to follow their dreams. Awardees are presented with prize money, a trophy, and a citation in recognition of their achievements. Since its inception in 2003, the CavinKare Ability Awards has honoured over 80 recipients and brought to the fore their exemplary achievements and is today, a much sought-after recognition, country-wide for the disability sector.

The last date for receipt of nominations for CavinKare Ability Awards 2022 is 10 December 2021. A person can be nominated for any one category only. Any Indian national with disability (as per the Persons with Disabilities Act, 1995) who has done exceptional work in his/her chosen field is eligible to apply. The nominations go through a process of short-listing, interviews and site visits and recipients are then selected by a discerning jury.

For more information and to send in your nominations, please log on to www.cavinkare.com or www.abilityfoundation.org or call +918939675544.

Headquartered in Chennai, the Foundation focuses on empowerment and highlighting the potential of persons with disabilities, and moves steadfastly towards bridging the divide between people with and without disabilities. Towards this, Ability Foundation’s activities range from publishing, employment, media, culture, implementation of policy, legislation and human rights. Ability Foundation works on the strong conviction that the disability per se is not as handicapping as people’s attitudes and man-made barriers. Given the right opportunities at the right time, so much more is possible. All it takes is an open mind.