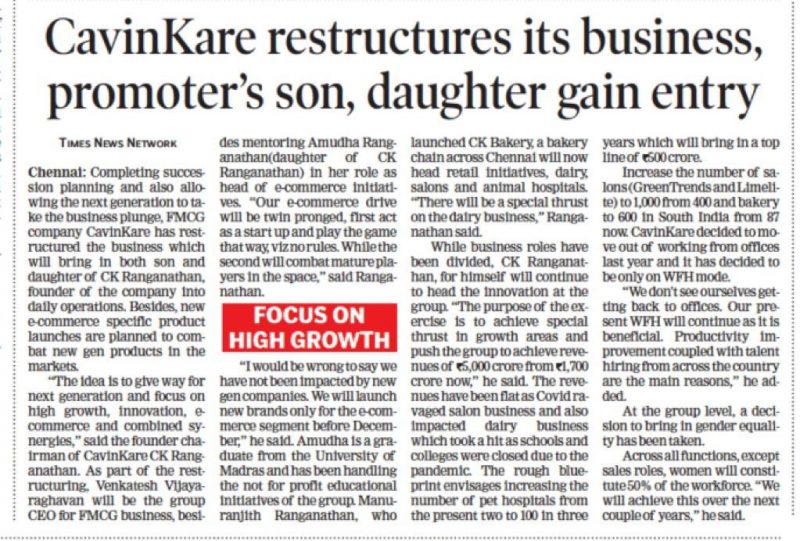 Completing succession planning and also allowing the next generation to take the business plunge, FMCG company CavinKare has restructured the business which will bring in both son and daughter of CK Ranganathan, founder of the company into daily operations. Besides, new e-commerce-specific product launches are planned to combat new-gen products in the markets.

“The idea is to give way for the next generation and focus on high growth, innovation, e-commerce, and combined synergies,” said the founder chairman of CavinKare CK Ranganathan. As part of the restructuring, Venkatesh Vijayaraghavan will be the group CEO for the FMCG business, besides mentoring Amudha Ranganathan (daughter of CK Ranganathan) in her role as head of e-commerce initiatives. “Our e-commerce drive will be twin-pronged, first act as a start-up and play the game that way, viz no rules. While the second will combat mature players in the space,” said Ranganathan.

“I would be wrong to say we have not been impacted by new-gen companies. We will launch new brands only for the e-commerce segment before December,” he said. Amudha is a graduate from the University of Madras and has been handling the not-for-profit educational Initiatives of the group. Manuranjith Ranganathan, who launched CK Bakery, a bakery chain across Chennai will now head retail initiatives, dairy, salons, and animal hospitals. “There will be a special thrust on the dairy business,” Ranganathan said.

While business roles have been divided, CK Ranganathan, himself will continue to head the innovation at the group “The purpose of the exercise is to achieve special thrust in growth areas and push the group to achieve revenues of 5,000 crores from 1,700 crores now,” he said. The revenues have been flat as Covid ravaged the salon business and also impacted the dairy business which took a hit as schools and colleges were closed due to the pandemic. The rough blueprint envisages increasing the number of pet hospitals from the present two to 100 in three years which will bring in a top line of 500 crore

Increase the number of salons (Green Trends and Limelite) to 1,000 from 400 and bakeries to 600 in South India from 87 now. CavinKare decided to move out of working from offices last year and it has decided to be only on WFH mode.

“We don’t see ourselves getting back to offices. Our present WFH will continue as it is beneficial. Productivity improvement coupled with talent-hiring from across the country are the main reasons,” he added.

At the group level, a decision to bring about gender equality has been taken.

Across all functions, except sales roles, women will constitute 50% of the workforce. “We will achieve this over the next couple of years,” he said.